China did not have a hard landing; Donald Trump softened his campaign ‘s protectionist rhetoric and avoided a trade war; Brexit negotiations and high inflation did not tank the UK economy; and the North Korea standoff did not escalate. Despite these concerns, 2017 turned out to be an extraordinarily positive year for markets and the global economy, where growth was better than the previous year and risk assets increased in general.

The US economy continued in its Goldilocks scenario. Real growth accelerated in the second half of the year, inflation remained subdued, and corporate earnings began to accelerate. In addition, the Federal Reserve, along with other major central banks, began reducing monetary accommodation. The Federal Reserve not only raised rates three times, it also began shrinking its massive $4.5T balance sheet.

Warren Buffet recently offered an illustration to demonstrate the incremental value which will accrue to corporate shareholders because of the reduction in corporate tax rates from 35% to 21%. Take a company that has two shareholders: the “Founder” and the “Government.” In 2017 the Founder captured 65% of all profits and the Government 35% (tax collection). Now with passage of the new tax bill the Founder keeps 79% (65% + 14%) and the Government retains 21% (35%-14%). In plain narrative, the passage of tax legislation has increased the value of a typical corporation by almost 22% (14%/65%). This is meant to be a simplified illustration but hopefully one that drives home the point that incremental cash flow generation related to lower taxes, compounded over time, should not be underestimated. Many thanks to the Oracle of Omaha for his simple but powerful illustration.

Think Outside the US

Improving and more synchronized global growth also helped lift animal spirits. All 45 major economies tracked by the Organization for Economic Cooperation and Development grew in 2017, and that will likely continue in 2018, with world GDP growth expected between 3- 3.5%. However, since the end of the Great Recession, it has been the US economy carrying the growth baton. During this period, US stocks have outperformed their international counterparts by a wide margin. This outperformance has contributed to increased disparity in relative valuations. The price relative to earnings for the S&P500 index stands at 19x versus 16x for the MSCI World ex US index. Moreover, Europe, Japan and several emerging markets are in earlier stages of their business cycles and potentially can benefit from a longer economic expansion from this point forward. Based on expected returns, valuations, relative economic cycles, currency trends and diversification benefits, we continue to advocate including non- US exposure in a typical client portfolio. (Source: Legg Mason, Bloomberg)

The cryptocurrency craze seemed to intensify during 2017. Bitcoin, the first cryptocurrency created in 2009, is a digital asset designed to work as a medium of exchange using cryptography to secure transactions, to control the creation of additional units and to verify transfer of assets.

Bitcoin’s soaring price in 2017 easily outperformed the returns from many traditional financial assets like stocks, bonds and gold. Even companies that have nothing to do with cryptocurrencies are now looking to join the craze. Take Long Island Ice Tea Corp, an unprofitable beverage company whose shares appreciated more than 250% after the company rebranded itself to Long Blockchain Corp. Perhaps we should rebrand ourselves to Blockchain Asset Management…

Frenzies such as the bitcoin mania sometimes portend a market environment that may be exhibiting too much euphoria. But even if Bitcoin proves overvalued in hindsight, it’s important to remember, as in any market, current price can differ from true value for a sustained period. In 1996, then Fed Chair Alan Greenspan stated the stock market was acting “irrationally exuberant”. Well, the stock market disagreed, as the market annual returns for 1996, 1997,1998 and 1999 were: 22.7%, 33.1%, 28.3% and 20.9% respectively.

We of course know the tech “bubble” did eventually burst in 2000 causing pain for investors that ignored valuations and proper diversification. With that said, we would add, trying to ride a trend in something like Bitcoin price may prove elusive and perhaps expensive. While it’s fun to analyze Bitcoin’s “true value” and whether a subsequent “bubble” ends poorly or not, we prefer to focus our energy and efforts on sound investing principals and maintaining and intelligently growing your investable wealth. We expect 2018 will offer a different set of opportunities and some departures relative to 2017.

2018 May very well be the year of change

For starters, inflationary pressures may prove somewhat greater than anticipated. A tight labor market (and increasing corporate profitability) may, albeit slowly, contribute to accelerating wage growth, which in turn could drive inflation higher. If this is the case, the Federal Reserve might need to raise rates faster than previously anticipated. Newly enacted tax cuts could help fuel US inflation beyond the Fed’s target of 2% in 2018. Higher inflation could also result for other reasons, none of which we would rule out: increased commodity prices, an event-driven oil price increase, cyclical pressures, a weak U.S. dollar and perhaps poorly timed additional fiscal stimulus.

The era of extremely easy money is coming to an end: The Federal Reserve is increasing rates while also reducing its bond buying program; the European Central Bank is also gradually reducing its accommodative measures; and the Bank of Japan is targeting positive ten-year yields. Improving economic growth both globally and domestically combined with more expansive fiscal policy should generate higher global yields over time. For fixed income investors this would be very welcomed news. 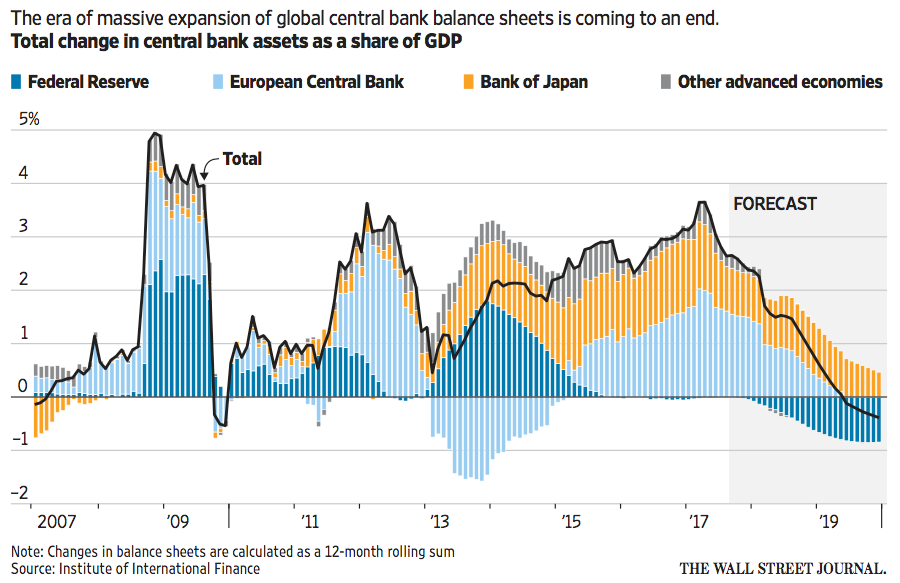 During 2017 the S&P 500 advanced every month on a total return basis, something that had not taken place since the late 1950’s. And, as the eight-and-a-half-year bull market grows older, and market sentiment turns increasingly “bullish”, the likelihood of a noteworthy market correction would logically be expected to increase. In 2018 we may finally get the elusive stock market correction, and/or a rotation from “high fliers” (richly valued companies) to more attractively priced stocks. In short, we wouldn’t be surprised if 2018 is a year of greater market volatility and some short-term discomfort. If this occurs, it would be a sharp contrast to the generally uninterrupted trend for stock prices over the past few years. We would add a selloff in the bond market should not be ruled out for 2018, but any upward shift in the yield curve would hopefully create buying opportunities not seen in years.

We wish you and your family a happy and healthy new year and remain appreciative of the opportunity to help you achieve your financial goals.