THE MESSAGE TRUMPS THE MESSENGER

The legislative agenda has slowed amid investigations of potential Russian election interference and other issues. Given the current environment, investors have become increasingly skeptical of any near term passage of pro-growth, pro-business policies (cornerstone of the “reflation trade”). In our view, political news has the potential to sway markets, but ultimately the factors that drive financial markets are economic growth, corporate earnings, monetary policy, and sound legislation (or lack of). In this regard, the financial landscape is favorable and the rising pessimism surrounding D.C. may (hopefully) prove overdone.

Trump’s election victory generated a bout of optimism centered on proposed tax and healthcare reform, financial market deregulation and infrastructure spending. The chart depicts the results of a study by the Blackrock Investment Institute which categorizes the performance of stocks in the S&P 1500 index into three categories based on their profits for the three trading days after the 2016 U.S presidential election. Initial “winners” were concentrated in financials, industrials and healthcare, while the initial “losers were in energy, technology and telecommunications. The remaining sectors were deemed “neutral.”

A little more than six months since the election, it seems that the “Trump trade” was largely a head fake, as financials have given up most of their relative gains and sectors such as technology, which did not participate in the original move, became one of the leaders in the first half of 2017. Interesting to note, the Mexican peso, which suffered heavy post-election losses on concerns of a tougher US stance on trade, has also recovered most of its losses. This is yet another reminder that while modest tactical changes to a portfolio can be prudent, abandoning the principals of diversification by excessively under or over weighting a sector or theme may prove unwise. (Note: given the current political and economic uncertainties, we expect a continuation of abrupt, short lived sector rotations.)

It remains our investment thesis that the reflation story extends beyond the US and that global investments, which typically benefit from this environment, could continue to prosper amid improving economic conditions.

Major regions of the world economy 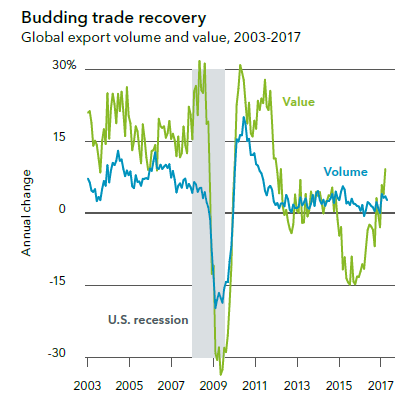 are experiencing a more synchronized recovery in 2017, as reflected by a pickup in global trade volumes. Emerging market economies have also bounced back from a three-year decline that resulted largely from a bear market in commodities. Of particular interest to us today is emerging markets account for 60% of global GDP, yet only represent 10% of world market capitalization1. A gap too wide in our view, even after adjusting for volatility. 1International Monetary Funds 2017, MSCI Indices

One confusing puzzle piece of the U.S. economic expansion remains low wage growth. Several factors such as globalization, e-commerce, low productivity levels and limited corporate pricing power are all contributing to below trend wage increases. Nevertheless, a further tightening of the U.S. labor market could be the spark that finally pushes wages materially higher.

During their mid-June meeting, the Federal Reserve increased the Fed Funds rate (the rate at which banks can lend to each other) for the second time in 2017. In reaction, the treasury yield curve flattened further (the yield curve is commonly represented by the difference between the yield of the 2YR Treasury and the 10Yr Treasury). This rate hike was largely expected, yet the “hawkish” tone of the Fed was a bit of a surprise to the market given weaker inflationary data driven by falling oil prices. The Federal Reserve indicated three rate hikes per year for the next two years as it continues to normalize interest rate policy and explained it sees the lower inflationary data as temporary. In addition, it indicated that the unwinding of its balance sheet could start earlier than previously expected.

The fixed income market did not seem to agree with the Fed’s forecast. The breakeven inflation rate declined to 1.68% (it was at 2.08% in January). The breakeven inflation rate is a measure of inflation expectations based on the pricing of Treasury Inflation Protected securities (TIPS). While respecting the digital world (see amazon commentary on next page) and an aging US population (two powerful disinflationary forces), we lean towards the Federal Reserve’s point of view that inflation is more likely to surprise to the upside. Any sound passage of fiscal legislation would serve to reinforce our view of a future increase in the levels of inflation.

Amazon looks to digest Whole Foods. A somewhat surprising, but perhaps complementary marriage. Two different consumer models; one based on providing vast choices online and the other focused on specialty products, aiming to benefit from each other’s strengths. One striking aspect of the proposed deal is we have a technology based company desiring a “brick and mortar” component. Walmart, which receives more than half its sales from groceries, has already demonstrated how a company can successfully incorporate a digital presence with store front locations. Let the price wars begin.

This is an opportune time to share some thoughts on technology and how it relates to the consumer and investing:

3. In every “Boom” cycle there will be companies that offer popular services/products but only a few will develop into sustainable business models.

4. History has shown that “old” tech/consumer companies can successfully adapt to a changing environment (remember the Netflix DVD model and Apple’s Lisa PC and even Microsoft which has successfully transitioned into a Cloud computing powerhouse from just a software company). It has also shown that companies who fail to reinvent themselves will languish.

5. 2017 is not 1999. Technology profit margins (measured in aggregate) are nearly twice those recorded in the tech bubble and valuations in general are dramatically lower today, but not inexpensive in our view.

While an Uber or Lyft may be reducing the demand for auto rentals and purchases (and for that matter taxis) it is simultaneously increasing the demand for self-driving cars. This allows, for example, a “stodgy” auto part company to be part of a transformational change. We expect old economy and new economy companies to coexist and complement each other much better than they did in 2000. We also think portfolios should reflect both themes. Trends will come and go but owning companies with sound, well-funded business models that can adapt to consumer preferences should allow for strong participation in a growing and rapidly evolving world.