The Quarter in Review: Another Strong Year for Equities

Fixed income markets did not fare as well as their equity counterparts. Domestic fixed income, an important component of a balanced portfolio, was down 2.0% for the year as measured by the Barclays US Aggregate Fixed Income Index. International fixed income markets were also weaker during 2013. The Barclays Global Treasury ex US Index that tracks non-US investment grade sovereign debt was down 3.2% for the period. The JP Morgan Emerging Government Bond Index which tracks the local currency debt of emerging governments was particularly affected with a 10.8% negative return. 2013 marked a year full of political and financial turmoil in many countries. During the year, the US saw the fiscal cliff, sequestration, a government shutdown that lasted 16 days and the largest municipal bankruptcy in history (see graph below). On the international front, the ongoing conflict in Syria almost led to another war, and the Fed’s decision to reduce its assets purchases (or “taper”) sparked elevated volatility within emerging markets.

U.S. Economy: The Year of the “Taper Talk”

The Federal Reserve’s plan to begin tapering took center stage in the last quarter of the year. Although investors feared the thought of tapering for most of 2013, the Federal Reserve’s December tapering announcement resulted in a nearly 2% positive surge in the major US stock market indices. Of course, the actual reduction in bond purchases may be met with less investor enthusiasm in 2014.

Economic statistics released in late December, for the most part, supported the Federal Reserve’s optimistic view on the US economy. The Commerce Department reported that durable goods sales for November rose 3.5%, well ahead of the consensus estimate of 2%. Housing prices increased 9.3% this year which, together with rising stock prices, is creating a “wealth effect” that should hopefully give consumers the confidence to increase spending.

Also a positive, the most recent reading from the Bureau of Economic Analysis showed that GDP increased at an annual rate of 4.1% during the third quarter of 2013, up from a 2.5% increase for the second quarter and a 1.1% increase in the first quarter. As a result of this acceleration in GDP growth many economists are now projecting growth around 3% plus or minus 0.25% for 2014. However, not all news has been positive. For instance, the December jobs report failed to impress. Specifically, 74,000 jobs were created for the month, versus expectations of 193,000 job additions. The unemployment rate dropped to 6.7% due once again to a drop in the labor force participation rate which is now at a 35 year low. While a falling unemployment rate is generally a good sign, we would much rather see it accompanied by a stable or growing labor participation rate (see graph below). 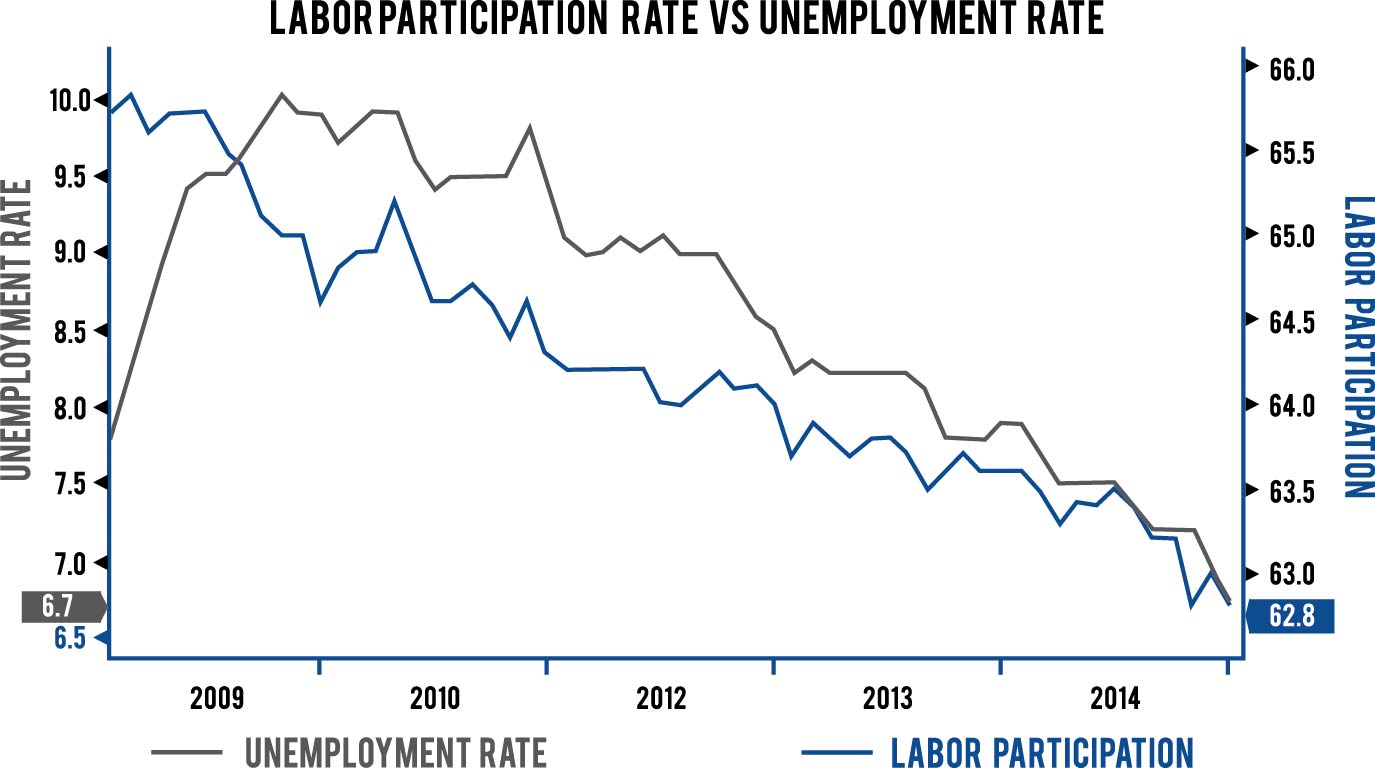 Click on the graph to see full-size image. (Source: Bloomberg)

International: Developed Markets on the Mend

Developed markets generally fared better as economic conditions in Europe improved and Japan continued to benefit from the monetary and fiscal stimulus measures announced during the year. In Europe, improving GDP trends indicate that the worst may be behind us. To aid the nascent recovery, the European Central Bank lowered interest rates during their November meeting to 0.25% and indicated its intention to continue accommodative policies. In Japan, Abenomics, seems to be having the intended effect. Deflationary pressures are decreasing and the Japanese stock market posted a strong year. China’s growth is likely to continue to slow in the near term but the country is showing some signs of stabilization. China’s leaders announced in November an Economic Reform Plan aimed at overhauling the Chinese economy by 2020. If effectively implemented, these reforms could lead to more sustainable growth over the long term.

Concerns remain about how the tapering process in the US will affect certain emerging markets. We believe that the emerging market universe is diverse and it is very important to analyze on a per country basis. We view countries that are highly dependent on commodity exploration and mining as well as those with high current account deficits, such as Turkey, India & Brazil to name a few, as being most vulnerable to a US tapering.

A Look Ahead: What the Facts Suggest for 2014

In general, 2014 should witness a strengthening global economy absent any major geopolitical or macroeconomic shock to the system. While some divergences have started to appear, many Central Banks around the world remain committed to monetary “reflation” which should continue to aid global growth. Macroeconomic risks seem to be subsiding and confidence is improving as economies improve.

In the United States, we expect a modest acceleration in economic growth, led by a decrease in fiscal drag that resulted from the increase in tax rates in early January 2013. Financial risks are slowly receding and economic statistics seem to indicate that the consumer and housing markets are in good shape. Although S&P 500 earnings are only projected to increase mid-single digits this year, it may be enough to push stocks higher if inflation stays subdued and interest rates remain low. Many corporations are flush with cash and are increasing capital spending, boosting dividends, and initiating stock buy backs at record levels. We continue to favor these types of companies over the Tesla and Twitters of the world. In the event of a market correction, we would feel more comfortable owning high quality companies versus high fliers. As the stock market continues to rise, the likelihood of a correction increases. We would view a pull back as healthy and not necessarily a precursor for a bad 2014. As investors experienced last year, it pays to have a disciplined investment approach. Trying to time short-term market fluctuations is not an efficient investment strategy and can have a negative impact on long-term performance.

We do not expect much change in the direction of Federal Reserve policy once Janet Yellen takes the reins from Ben Bernake as the new Chairperson. The Federal Reserve will begin the tapering process in January by reducing its bond buying from $85 billion a month to $75 billion a month. We view this $10 billion reduction as a small but positive step forward (in the short term- the stock market may disagree). The Federal Reserve has indicated that it will remain data dependent and adjust its bond purchases (down or up) based on the strength of the economy. With that said, an incremental and strategic tapering process should not by itself pose a threat to the stock market. However, tapering is not without risk. If economic growth continues to get stronger, and the unemployment rates move down faster than expected, the Federal Reserve could increase its pace of tapering which may lead to higher interest rates sooner than expected.

It is important to note that the valuation story in the US is not as compelling as it has been in past years. Despite the fact that on a forward price-to-earnings (P/E) basis valuations do not seem historically stretched, we do not believe multiple expansion will be as pronounced in 2014 as it was last year. We have an overall positive outlook on the US economy in 2014 but it is likely that returns will be more muted this year unless earnings outpace their current forecasts.

1. S&P 500 Index: [Also referred to as “Standard & Poor’s 500”] An index, provided by the S&P Dow Jones Indices, that tracks the performance of 500 leading U.S. companies and is widely regarded as the best single gauge of large cap U.S. equities. (S&P Dow Jones Indicies)

2. FTSE All World ex US Index: An index, provided by the FTSE Group, commonly used by U.S. investors to track the performance of the international stock market as a whole. The index is comprised of Developed and Emerging Markets and excludes the U.S. (FTSE.com)

3. Fiscal Cliff: A combination of expiring tax cuts and across-the-board government spending cuts scheduled to become effective Dec. 31, 2012. The idea behind the fiscal cliff was that if the federal government allowed these two events to proceed as planned, they would have a detrimental effect on an already shaky economy. (investopedia.com)

4. Sequestration: Most recently, the threat of sequestration was included in the Budget Control Act of 2011, which called for across-the-board spending cuts if its committee failed to reach a budget agreement. With Congress still unable to reach an agreement, sequestration was approved and went into effect on March 4, 2013. (investopedia.com)

5. Taper: The term used by the Federal Reserve to explain how it will gradually reduce its $85 billion a month bond purchasing program (quantitative easing).

9. Reflation: An economic or monetary policy, designed to expand a country’s production and curb the negative effects of deflation. Reflation policies can include reducing taxes, changing the money supply and lowering interest rates. Reflation is generally a net positive for the economy. (investopedia.com)

10. Fiscal Drag: Fiscal drag is a drag or damper on the economy caused by a lack of Government spending or excessive taxation. (investopedia.com)

Important Disclosure: Please remember that past performance may not be indicative of future results.  Different types of investments involve varying degrees of risk, and there can be no assurance that the future performance of any specific investment, investment strategy, or product (including the investments and/or investment strategies recommended or undertaken by PWM Advisory Group. [“PWM”] ), or any non-investment related content, made reference to directly or indirectly in this newsletter will be profitable, equal any corresponding indicated historical performance level(s), be suitable for your portfolio or individual situation, or prove successful.  Due to various factors, including changing market conditions and/or applicable laws, the content may no longer be reflective of current opinions or positions.  Moreover, you should not assume that any discussion or information contained in this newsletter serves as the receipt of, or as a substitute for, personalized investment advice from PWM. Please remember to contact PWM in writing, if there are any changes in your personal/financial situation or investment objectives for the purpose of reviewing/evaluating/revising our previous recommendations and/or services. PWM is neither a law firm nor a certified public accounting firm and no portion of the newsletter content should be construed as legal or accounting advice. A copy of the PWM current written disclosure statement discussing our advisory services and fees is available for review upon request. Photo Credit: tpsdave