The Quarter in Review

Global equity markets showed increasing signs of fatigue as a result of the ongoing geopolitical headwinds, concerns about global growth and the burgeoning Ebola situation. For the quarter, the S&P 500 advanced 1.1% while the FTSE All World ex US Index lost 5.1%.

Domestic fixed income, as measured by the Barclays US Aggregate Fixed Income Index, continued its positive performance, gaining 0.17% for the period.

U.S. Economic data released at the end of the quarter was mostly positive. The final revision for second quarter Gross Domestic Product (GDP) showed a healthy 4.6% annual rate of growth, revised upwards from a previous read of 4.2%. While the economy appears to be heading in the right direction, the current expansionary period (2010-2014) has only averaged 2.2% a year, well below the 50 year average GDP growth rate of 3% (see “Real GDP” chart below). Business spending, or the lack there of, is a contributing factor to our current slow growth environment (see “Corporate Cash as a % of Current Assets” chart on the following page). As confidence in the business climate improves however, anticipated capital expenditures should rise as companies start to replace depreciating equipment and spend down some of the high cash balances on their books. The eventual realization of this deferred spending will likely help towards pushing GDP growth closer to its historical average. 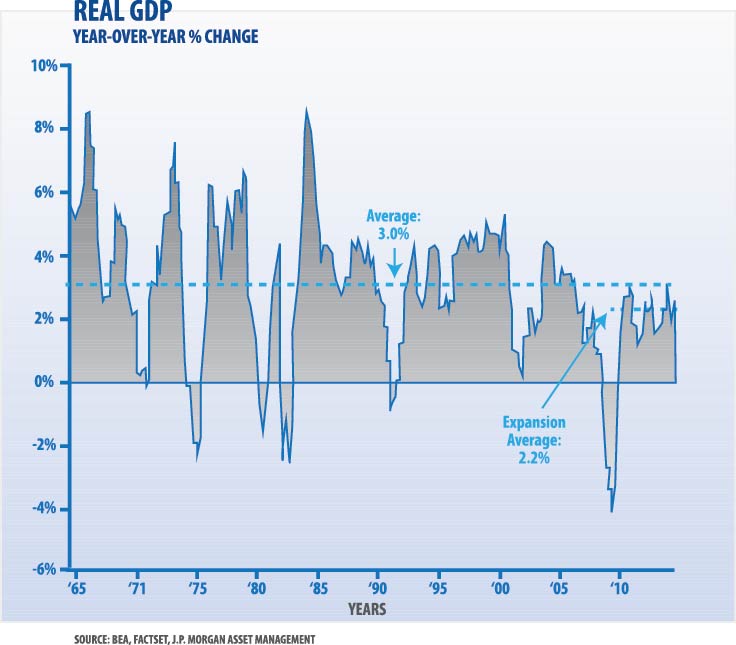 Another important trend witnessed in the third quarter was a strengthening dollar (see “US Dollar Index” chart on the following page). A strong dollar has both positive and negative implications:

On one hand, it should help keep inflation in check as foreign imports become more competitively priced versus items manufactured in the US, thus helping foreign exporters. A strong dollar also drives down dollar-denominated commodities such as oil, which means additional savings for the US consumer in the form of lower gasoline prices and higher disposable income. This disinflationary effect could reduce some of the pressure for the Federal Reserve to raise rates sooner. 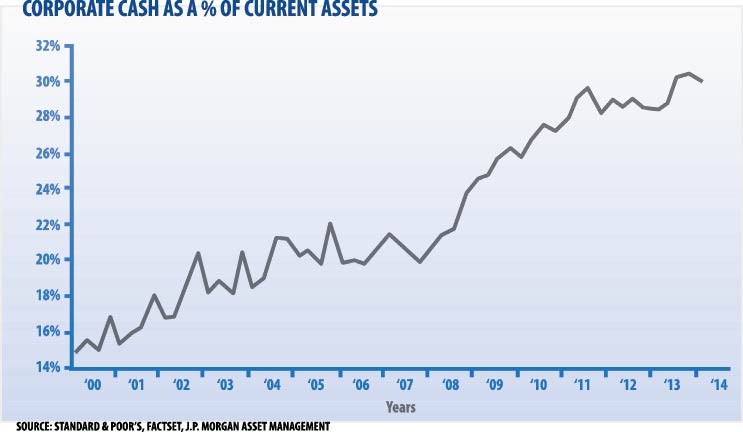 On the other hand, a higher greenback could negatively impact the value of foreign earnings to U.S. multinational companies and also hurt US exporters. As the third quarter earnings season progresses, we will be able to better gauge how this currency translation issue impacts corporate profitability for multinational companies, as well as its effects on domestic exporters. The recently released Fed minutes indicate concerns about global growth and the economic impacts of a stronger dollar. This represents a meaningful development in the Fed’s running debate about when to raise short term interest rates from near zero.

The turbulent quarter was characterized with a continuation of the ongoing crisis in geopolitical hotspots (Ukraine & Russia, Hamas & Gaza, Iraq & ISIS), civil unrest around the globe and a vote for independence. In China, a group of pro- democracy students took to the streets of Hong Kong demanding public nomination for Hong Kong chief executive, the city’s top post. In Scotland, voters took to the polls to vote on a referendum to decide whether Scotland should remain part of the United Kingdom. The outcome of the referendum was that Scotland was to remain part of the U.K, alleviating a whole set of unknowns related to the potential break up. On top of the previously mentioned civil and military conflicts, Western Africa is battling an Ebola outbreak that, according to the World Health Organization (WHO), has already killed over 4,000 people mainly in Liberia, Sierra Leone and Guinea. 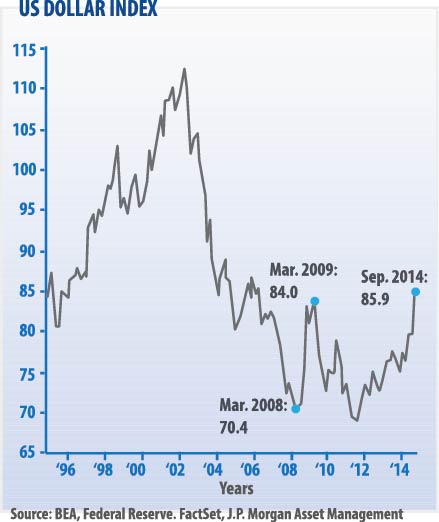 A string of weak economic data has increased concerns that the Eurozone’s recovery could be losing steam. Germany, Europe’s biggest economy, has shown increasing signs of a slowdown. A drop in German exports came after poor readings for manufacturing orders and factory output in the country. To stimulate growth and battle falling inflation concerns, the European Central Bank is embarking on a series of measures, on top of interest rate cuts, intended to spur bank lending. European Central Bank president Mario Draghi stated: “We are accountable to the European people for delivering price stability, which today means lifting inflation from its excessively low levels. And we will do exactly that.” He also added “We are ready to alter the size and/or the composition of our unconventional interventions, and therefore, of our balance sheet, as required.” During his speech, Mario Draghi also stated that the ECB’s easy money policies would have limited effects without structural economic overhauls in Europe: “I am uncertain there will be very good times ahead if we do not reform now,” he said, adding those that are able should “exploit the available fiscal space” in European Union rules. As we have indicated previously, we believe the European countries should continue taking steps towards a more fiscally integrated European Union.

The wall of worry seems to be getting taller as the year progresses. The geopolitical issues do not seem to abate; the Ebola virus continues to wreak havoc in Western Africa & concerns about global economic growth are on the rise. In the US, uncertainty surrounding the timing of the first rate hike by the Federal Reserve, coupled with the fact that we are in the heels of a midterm election have dented investor confidence and increased volatility. Market valuations have increased and the U.S stock market has not had a 10% correction since March 2009.

Even though global fears have increased we do not want to lose sight of the longer term picture. The United States economy is improving and the Federal Reserve is paying close attention to the effects of weaker global growth and a stronger dollar before making changes to their monetary stance. The ECB and Japanese Central Bank are increasing their monetary easing actions; which should help pick up the slack from the removal of the Fed’s policies when the time comes.

While market volatility has escalated, we do not deem market timing as a reliable strategy. A Charles Schwab study using Standard and Poor’s data shows that between 1994-2013, missing the top ten up days in the market would have resulted in a reduction in average annual returns from 9.2% to 5.5% per year*. Fear, greed and the short term movements of the market should not drive investment decisions. Rather, we continue to advocate a disciplined approach to investing that is consistent with your long term goals, time horizon and risk tolerance.

EBOLA: A rare and deadly disease caused by infection with one of the Ebola virus strains. Ebola can cause disease in humans and nonhuman primates (monkeys, gorillas, and chimpanzees).Ebola was first discovered in 1976 near the Ebola River. Since then, outbreaks have appeared sporadically in Africa. On the basis of evidence and the nature of similar viruses, researchers believe that the virus is animal-borne and that bats are the most likely reservoir. (cdc.gov)

CAPEX: Funds used by a company to acquire or upgrade physical assets such as property, industrial buildings or equipment. This type of outlay is made by companies to maintain or increase the scope of their operations. These expenditures can include everything from repairing a roof to building a brand new factory. (investopedia)

NET EXPORTS: The value of a country’s total exports minus the value of its total imports. It is used to calculate a country’s aggregate expenditures, or GDP, in an open economy.(investopedia)

DEPRECIATION: A method of allocating the cost of a tangible asset over its useful life. Businesses depreciate long-term assets for both tax and accounting purposes. (investopedia)

MARKET TIMING: The act of attempting to predict the future direction of the market, typically through the use of technical indicators or economic data. (investopedia)

Important Disclosure: Please remember that past performance may not be indicative of future results.  Different types of investments involve varying degrees of risk, and there can be no assurance that the future performance of any specific investment, investment strategy, or product (including the investments and/or investment strategies recommended or undertaken by PWM Advisory Group. [“PWM”] ), or any non-investment related content, made reference to directly or indirectly in this newsletter will be profitable, equal any corresponding indicated historical performance level(s), be suitable for your portfolio or individual situation, or prove successful.  Due to various factors, including changing market conditions and/or applicable laws, the content may no longer be reflective of current opinions or positions.  Moreover, you should not assume that any discussion or information contained in this newsletter serves as the receipt of, or as a substitute for, personalized investment advice from PWM. Please remember to contact PWM in writing, if there are any changes in your personal/financial situation or investment objectives for the purpose of reviewing/evaluating/revising our previous recommendations and/or services. PWM is neither a law firm nor a certified public accounting firm and no portion of the newsletter content should be construed as legal or accounting advice. A copy of the PWM current written disclosure statement discussing our advisory services and fees is available for review upon request. Photo Credit: FrankWinkler