The Quarter in Numbers

The Negative Interest Rate World We Live In

Central Banks have resorted to negative interest rates in an effort to spur bank lending and stimulate the economy. They control the overnight rate, which is the rate that commercial banks (borrowing institutions) typically receive (but now sometimes pay) for overnight deposits.

In Japan and the Eurozone the deposit rate has turned negative. By making commercial banks pay for deposits held at the Central Bank, the intention is to incentivize banks to make more loans to consumers instead of parking idle funds in reserves. Central Banks theorize a negative interest rate will push down short term rates on other types of lending such as mortgages and consumer rates thus further spurring investment. This in theory provides an economic boost and weakens the currency of any participating economy, thus boosting manufacturing and benefitting exporters.

Government Bond buying programs in Europe and Japan (quantitative easing), expectations of slower global growth and a search for safe haven assets are also factors influencing the current yield environment. Ten-Year government bonds of Switzerland, Denmark, Finland, Japan and Germany to name a few have negative yields. In the United States, the yield of the 10-year Treasury is still positive at 1.38%. This may not sound very attractive but once the alternatives are considered it becomes one of the best, if not the best, option for global bond investors. This environment of low and negative interest rates around the world has served to drive down yields for the US bond market.

It will be difficult to predict when the US bond market decouples from the gravitational pull of negative yields across the globe. Traditional economic theory suggests that nominal interest rates are “zero bound,” and can’t stay in negative territory for long because savers and investors will withdraw their cash and store it themselves, emptying banks and crippling the financial system. This assumption has now been challenged. While we have learned investors and/or depositors are willing to pay a price for the presumed safety of their funds, the long term implications of negative interest rates are yet to be fully understood. What is certain is that economic textbooks are being rewritten and only time will determine the impact of this negative yield environment on the real economy. 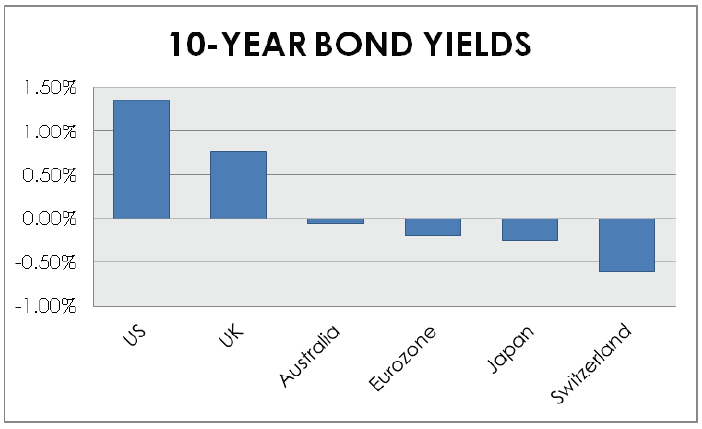 The Brexit Vote is Official. What Next?

As we wrote in our special update, 52% of British citizens who participated in the referendum voted to leave the European Union (EU). Both the surprise outcome and the uncertainty relating to how the exit would unfold, contributed to a large decline in global markets and a shift toward safe haven assets such as the dollar, US Treasuries and gold. The Sterling fell to a 30 year low against the dollar, the 10-Year US Treasury yield traded down to nearly a 1.4% yield and gold jumped almost 5%. Most global markets staged a dramatic comeback, however, as fears over another Lehman-type shock started to subside and Central Bankers around the world indicated they stand ready to provide liquidity to the market. The post Brexit vote market dip and subsequent comeback served as yet another reminder to investors why it is important not to overreact to short-term market swings.

What is the Impact of Brexit to the US Economy?

In the United States, recession odds remain fairly low although they are higher than before the Brexit shock. The economy is currently growing at a rate of 2-2.5% and UK challenges should have little direct impact to US growth (US exports are not highly dependent on the UK). Over the past few months, the labor market has continued to tighten as evidenced by the reduced trend in jobless claims and increase in wage growth. This in turn is bolstering the US consumer; retail sales are rising, and the housing market continues to inch forward.

The Federal Reserve will likely take a more cautious stance and a July rate hike is unlikely. In addition, long term policy goals may now take more time to unfold as we anticipate interest rates to be lower for longer.

Will the Dollar Appreciate?

The risk-off trade environment that ensued after the Brexit vote resulted in, and will likely continue to support, strength in the dollar. A powerful rally in the dollar could have a ripple effect globally. For example, a surging dollar presents a headwind to the earnings of US multinationals and hurts U.S exporters and manufacturers. It also has negative implications for the price of oil which is quoted in dollars. As we have seen, cheaper oil has some positive benefits, but extremely cheap oil leads to a host of negative issues within the energy related businesses (layoffs in the industry, increased likelihood of defaults on the debt of highly leveraged energy companies, etc.) In addition, commodity oriented emerging market countries are generally hurt by a rising dollar as it reduces their ability to service their debt.

Where Do We Go From Here?

In the near term, uncertainty will likely cause more volatility and raise the possibility of additional sharp pullbacks, but stocks and bonds will ultimately trade on fundamentals and not headline news. Corporate earnings are likely to improve from the first quarter, but the pace of earnings growth is expected to be modest in light of recent events.

We will continue to focus our investment management efforts on fundamentals while keeping a close eye on any short term dislocations in the market. Whether it be negative rates, political shocks, exogenous events, etc. our ultimate goal remains unchanged; build transparent portfolios that meet your long term needs and objectives. Should you have questions regarding the current economic or political environment and how it may impact your long term plan, please do not hesitate to contact us.

Important Disclosure: Please remember that past performance may not be indicative of future results. Different types of investments involve varying degrees of risk, and there can be no assurance that the future performance of any specific investment, investment strategy, or product (including the investments and/or investment strategies recommended or undertaken by PWM Advisory Group. [“PWM”] ), or any non-investment related content, made reference to directly or indirectly in this newsletter will be profitable, equal any corresponding indicated historical performance level(s), be suitable for your portfolio or individual situation, or prove successful. Due to various factors, including changing market conditions and/or applicable laws, the content may no longer be reflective of current opinions or positions. Moreover, you should not assume that any discussion or information contained in this newsletter serves as the receipt of, or as a substitute for, personalized investment advice from PWM. Please remember to contact PWM in writing, if there are any changes in your personal/financial situation or investment objectives for the purpose of reviewing/evaluating/revising our previous recommendations and/or services. PWM is neither a law firm nor a certified public accounting firm and no portion of the newsletter content should be construed as legal or accounting advice. A copy of the PWM current written disclosure statement discussing our advisory services and fees is available for review upon request.