• Equity markets around the world continue to be driven by diverging monetary policies and a stronger dollar. Overall, global monetary policy remains supportive for equities.
• A stronger dollar should help keep inflation tame and commodity prices low which are net positives for the US economy, but will have negative implications for domestic exporters and large cap multinational companies.
• Volatility is expected to remain elevated as uncertainty about the timing of the first rate hike continues.
• Commodity investments look interesting as prices have fallen back to levels last seen in 2001 and 2009.

A Tale of Two Trends

It appears the leadership in global equity markets is slowly shifting from US markets to international markets:

The European Central Bank, Bank of Japan and People’s Bank of China have taken the quantitative easing baton, along with Australia, Denmark, Korea and Russia which have also cut interest rates in response to sluggish domestic economic growth. The resulting currency depreciation and lower bond yields should push investors in these countries out in the risk spectrum, providing support for equity investments. Since the beginning of the year equity and bond prices in Europe have risen, inflation expectations have increased and the euro has depreciated.

In today’s bond market, it is not unusual for global bonds to have negative or only marginally positive yields. Investors abroad seem to be so concerned about their return of principal that they are willing to pay the issuing government for the privilege of investing in their bonds. Another way to see it is that investors are more concerned with their return of principal versus their return on principal. Against this backdrop, we believe US treasury yields will remain low as investors understandably find the 1.895% yield on the US 10 year Treasury more attractive than a 10 year German Bund at 0.179% or the Japanese 10 year bond at 0.38%.

Bottom Line: Global monetary policy remains extremely accommodative. In the United States, even as the Federal Reserve prepares to raise rates for the first time since 2006, interest rates are at such a low level that monetary policy should remain supportive of equities for some time. We also do not anticipate a large sell off in US bonds given the unattractive yields abroad. Barring a major misstep by the Federal Reserve, any sharp decline would most likely be attributable to a short-term overreaction rather than market fundamentals.

A Surge in the Dollar

Year to date, the US dollar has risen about 11.6% vs. the Euro. As mentioned previously, this is due to a divergence in monetary policies. While the European Central Bank is embarking on a quantitative easing strategy that should lower interest rates in Europe, the Federal Reserve is widely anticipated to raise rates in the US sometime in the near future. Broadly speaking, the US Dollar index, an index tracking the value of the United States dollar relative to a basket of six major foreign currencies, has increased nearly 23% over the twelve months ending March 31, 2015. 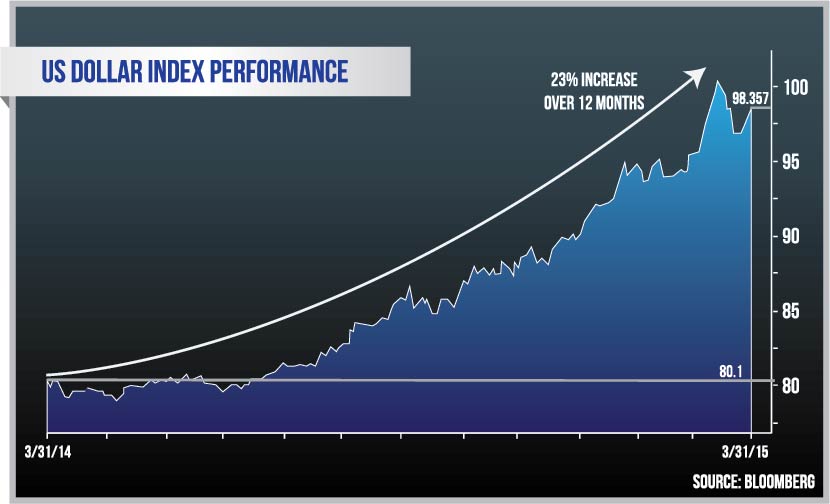 An appreciating dollar can have two major effects on the US economy. It should keep both inflation and raw material prices (which are mostly priced in dollars) low, which would be a net positive for US equities. On the other hand, US multinational companies will face negative headwinds as the value of revenues generated overseas will decline when translated back into the stronger US dollar. It also makes exports of US produced goods more expensive compared to those produced overseas.

It is still unclear when the first Fed interest rate hike will occur. We believe the Federal Reserve wants to remain flexible in with its timing, as it is cautious about the strengthening dollar, lack of wage growth in the labor markets and recent data that indicated a slowing US economy. If a rate hike occurs in 2015, we do not believe it will be in the first half of the year. At any rate (pun intended), we expect elevated volatility to continue as investors try to determine the timing and magnitude of the initial interest rate increase.

Bottom Line: We anticipate that the first rate hike could happen during the second half of the year, which should continue to fuel dollar strength albeit at a slower pace. Companies that are less impacted by a stronger dollar, namely those that generate a high portion of revenues domestically should perform well in this environment.

Although the media has focused on the more than 50% drop in oil prices in 2014, it was not a good year for commodities in general. The Goldman Sachs Commodity Index TR, an index that tracks a diversified group of commodities, lost over 33% for the year. Moreover, the index dropped an additional 8% in the first quarter of 2015. Slower global growth accompanied by decreased demand and a stronger dollar have contributed to this drop.

After years of underperformance, could we be nearing a bottom in commodities? It’s hard to tell. One thing that we know for certain is market conditions are not the same for all commodities. For example, iron ore seems to be in free fall while oil seems to be looking for a bottom. Many oil producers have announced cuts to capital expenditures and are shutting down drilling rigs which should eventually lower output and alleviate some of the downward pressure on oil prices. However, oversupply is likely to keep oil low over the next few months and could potentially result in further declines. Other commodities, such as precious metals including gold and silver are flat to positive for the year. Gold, in particular, could have a positive year as the inflationary based monetary policies undertaken by the European Central Bank and Bank of Japan increase demand. While not perfectly correlated, silver tends to benefit from an improvement in gold prices and also from increased demand for its industrial uses.

Taking a long term view, we anticipate that commodity prices will recover as demand/supply factors find equilibrium through increased demand, primarily from standard of living improvements in the emerging markets and reduced supply from producers who are curtailing their production in response to lower prices.

Bottom Line: The recent decrease in most commodity prices, we believe suggests attractive relative value against other assets (namely equities and bonds). Adding exposure to this asset class should be judged in accordance with your long-term goals, risk tolerance, and overall portfolio strategy.

Considerations for exposure to commodities include:

• The commodity complex has fallen to relatively inexpensive levels.
• Commodities are often viewed as investments that will perform well during periods of inflation.
• Historically, commodities have helped diversify balanced portfolios without sacrificing long-term performance.

Important Disclosure: Please remember that past performance may not be indicative of future results.  Different types of investments involve varying degrees of risk, and there can be no assurance that the future performance of any specific investment, investment strategy, or product (including the investments and/or investment strategies recommended or undertaken by PWM Advisory Group. [“PWM”] ), or any non-investment related content, made reference to directly or indirectly in this newsletter will be profitable, equal any corresponding indicated historical performance level(s), be suitable for your portfolio or individual situation, or prove successful.  Due to various factors, including changing market conditions and/or applicable laws, the content may no longer be reflective of current opinions or positions.  Moreover, you should not assume that any discussion or information contained in this newsletter serves as the receipt of, or as a substitute for, personalized investment advice from PWM. Please remember to contact PWM in writing, if there are any changes in your personal/financial situation or investment objectives for the purpose of reviewing/evaluating/revising our previous recommendations and/or services. PWM is neither a law firm nor a certified public accounting firm and no portion of the newsletter content should be construed as legal or accounting advice. A copy of the PWM current written disclosure statement discussing our advisory services and fees is available for review upon request. Photo Credit: danfador