• Despite elevated volatility, the global economy has not deviated too far from the positive trend set in the first quarter of 2015.
• The Federal Reserve seems to be closer to their first rate hike since 2006. The prospect of higher rates should continue to create increased market volatility, P/E multiple contraction, and the potential for price corrections in the capital markets.
• We believe that the international arena offers opportunities but will remain fragmented and volatile. Escalating global risks including economic deceleration in China coupled with increasing market intervention and, to a lesser degree, the Eurozone crisis, are some of the issues that warrant investor attention.

The Quarter in Numbers

Markets and the global economy are not too far from the trajectory they were on at the beginning of the year, despite all the international drama. Growth continues to be for the most part positive (albeit slow), inflation remains subdued, the U.S. dollar is strengthening and global interest rates are modestly higher.

A Fed Rate Hike On the Horizon?

With the first Federal Reserve rate hike on the horizon, we thought it would be timely to analyze the performance of the U.S. equity market during previous rate hikes. As Table 1 illustrates, the immediate reaction to the first rate hike of each cycle, dating back to 1983, has typically produced a mixed market reaction, followed by positive returns as the market digested higher rates and corporations continued to benefit from a recovering economy. While history doesn’t always repeat itself it often rhymes which leads us to believe that once the anticipated rate hike cycle gets underway, equities could surprise to the upside. Investors who try to time the market by waiting in cash may miss out on a recovering market.

While the current economic backdrop is similar to previous periods of rising rates, there are key differences. Unlike previous rate hike cycles, interest rates and the 10 Year Treasury yield are starting at very low levels. To put this in perspective, the Fed Funds rate is currently between 0 – 0.25% while the average starting point from the previous six cycles was 5% (see Table 2). The Federal Reserve has indicated its intention of 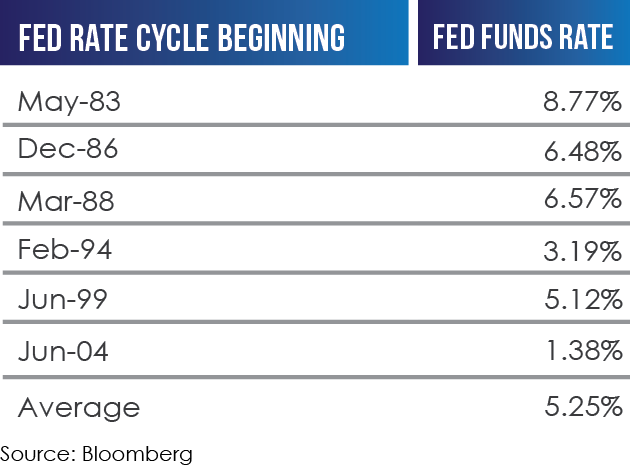 moving carefully and at a measured pace. If the Federal Reserve were to institute five quarterly increases at 0.25%, the Fed Funds rate would only increase to 1.25% (hardly a punitive level by any measure) which is why we believe the Fed Funds rate has some room to grow before it becomes a drag on economic growth. Moreover, equities tend to do well in an environment of low and upward moving rates and not so well in an environment where yields are high and moving higher.

Bottom Line: Periods of rising rates typically accompany an accelerating economy, climbing inflation or both. While we view this as a positive, the prospect of higher rates does create increased market volatility and the potential for price corrections in the capital market. Typically during periods of increasing rates, price earnings multiples for equities tend not to expand or may even contract – which means earnings growth is likely to become the main driver of stock returns.

Read our latest post “How Do Stocks React to Interest Rate Hikes?”

Let’s begin with Greece, where the Eurozone drama continues. After more than two weeks of an economy almost at a standstill the Greek government and the leaders of the European Union (EU) agreed on terms for a third Greek bailout. Creditors’ demands call for tough austerity measures that include tax increases and pension overhauls along with broader economic reform. The implementation of these new measures will probably translate into more years of high unemployment and recession for the Greek economy but will also mean that Greece remains in the European Union for the time being. In the long run, exiting the Euro might be the lesser of two evils as Greece can devalue its new currency and regain competitiveness in global markets. We view the risk of spillover effects into other peripheral members of the European Union as being further reduced as a result of this new bailout deal. In addition, it is important to note that European officials indicate they remain committed to the European Union and the European Central Bank stands ready to act as a backstop for the European economy.

What concerns us more is the recent selloff in Chinese markets and continuing economic deceleration in the country. Chinese equities witnessed a dramatic selloff before staging a modest comeback. To stem the selloff, Chinese officials have enacted several measures including interest rate cuts, restrictions on short selling, and a suspension of initial public offerings. They have also asked pension funds and brokers to invest in equities to support the market. It is difficult to predict how an increased level of market intervention by the Chinese government may affect the broader global economy and financial markets. As the largest consumer of commodities, the weakness in China has also fueled a commodity selloff. Most commodities have fallen near the lows hit in the wake of the 2008 financial crisis and may be approaching levels deemed fairly valued by investors and end users. Given the size of the Chinese economy, any significant slowdown should be taken seriously.

Bottom Line: We believe international markets will remain fragmented and volatile. While the Greece crisis does not appear to be a major concern, we remain wary of the Chinese economic deceleration and recent market volatility. In our opinion, it is still unclear what the effects the increasing market intervention by government officials will be in the local and foreign markets. For the time being, they appear to have stopped the bleeding but in the long run the Chinese markets could fall further as smart money sells into the market mirage. In addition, any hard landing by the Chinese economy could have global repercussions, particularly in the commodity markets. Despite all the turmoil overseas, we believe there are still relatively attractive and compelling investment opportunities in the international space. As evidenced in the graph below, international markets have significantly underperformed their main US counterpart over the past 5 years. We believe there is a strong likelihood this performance differential will narrow over the next few years.

In this volatile market environment, we want to remind our readers that we do not believe market timing is a reliable strategy. We find that investors who continuously let fear, greed and the short term movements of the market dictate investment decisions often end up doing more harm than good in the long run. We continue to advocate a disciplined investment approach that is consistent with your long term goals and risk tolerance.

Important Disclosure: Please remember that past performance may not be indicative of future results.  Different types of investments involve varying degrees of risk, and there can be no assurance that the future performance of any specific investment, investment strategy, or product (including the investments and/or investment strategies recommended or undertaken by PWM Advisory Group. [“PWM”] ), or any non-investment related content, made reference to directly or indirectly in this newsletter will be profitable, equal any corresponding indicated historical performance level(s), be suitable for your portfolio or individual situation, or prove successful.  Due to various factors, including changing market conditions and/or applicable laws, the content may no longer be reflective of current opinions or positions.  Moreover, you should not assume that any discussion or information contained in this newsletter serves as the receipt of, or as a substitute for, personalized investment advice from PWM. Please remember to contact PWM in writing, if there are any changes in your personal/financial situation or investment objectives for the purpose of reviewing/evaluating/revising our previous recommendations and/or services. PWM is neither a law firm nor a certified public accounting firm and no portion of the newsletter content should be construed as legal or accounting advice. A copy of the PWM current written disclosure statement discussing our advisory services and fees is available for review upon request. Photo Credit: cowins