Is it Too Early to Say 2017 is Looking Different?

Bond yields in several countries such as Germany, Switzerland and Japan had dropped into unchartered territory of negative yields but appear to be looking for a bottom in recent months.

Recently global growth expectations have been on the rise and country participation seems to be more broad and not confined to the US. Inflation rates have started to creep higher in different parts of the world, as perhaps the Trump “reflation” trade is for real.

This ray of optimism is also helping corporate earnings abroad, particularly in Japan and emerging markets, but Europe is also benefiting. Improved prospects for earnings growth and modest valuations make overseas stocks worthy of consideration. Not only are international valuations lower that the US, they are also lower than their own historical averages. Potentially strong earnings prospects bode well for overseas investing, given the fact most developed, non-US, markets are in the early stages of their business cycles. Despite a good start to the year, emerging market stocks also remain well below their long-term valuation metrics as measured by price to book ratios. The commodity price declines that negatively affected emerging markets appear to have come to an end which should help emerging markets return to growth in the coming years.

While growth prospects have improved, several structural factors, such as weak productivity growth, a declining workforce, and nationalistic trends, will most likely act to constrain near to intermediate term global economic output. It is very possible that the low growth will most likely be here longer that most people expect. Both global political uncertainty and the movement toward nationalistic and protectionist behavior act as impediments to sustainable economic growth.

What About The United States?

In the United States, expectations for a pro- growth, pro-business agenda, coupled with an acceleration in earnings and improving economic data, propelled markets (and their respective valuations) higher since the election.

However, the failure by Congress to “repeal and replace” Obamacare has created doubt about the potential for timely tax reform and the entire Trump agenda as they are more interrelated than first understood. As both consumers and businesses wait to see if tax and healthcare reform along with deregulation will materialize, the US economy could slow down.  Without these proposed changes taking place, equity prices become vulnerable to a potential resetting of expectations. A “de-risking” environment could be triggered by different factors including, but not limited to, a geopolitical shock (i.e. North Korea, Syria, Russia), a political misstep or perhaps a surprise European election outcome (France, Germany, UK).

On the interest rate front, the Federal Reserve has increased rates three times since the recovery began and indicates two additional hikes this year and three for 2018. While still behind the Federal Reserve, other central banks around the world are starting to slightly dial down monetary stimulus. In the US, a successful transition from “easy money” monetary policy to fiscal drivers such as tax relief and infrastructure spending could prove beneficial on many fronts.

The process of global interest rate normalization, beginning with the US, is expected to be slow and take several years to effectuate. Central banks will most likely need considerable time to withdraw liquidity from the system in a manner that is not disruptive to financial markets.  It is important to keep in mind the unwinding of these monetary policies has never been done before and there can be no guarantee of a perfect landing.

Has the 35 Year Romance with Fixed Income Finally Ended? 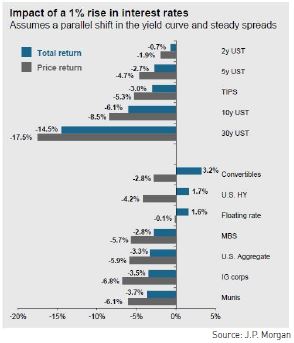 A little over thirty-five years ago the 10 Year US Treasury bond yield peaked at 15.84%. Purchasing fixed income investments anytime in the last three plus decades was most likely accompanied by attractive cash flow generation and subsequent price appreciation. Today is a different story.

If rates were to rise from today’s current low levels the value of many fixed income investments, especially long-dated bonds would be expected to decrease in value.  There can be no certainty that interest rates will move aggressively higher any time soon but over the continuation of this market cycle we expect yields will increase. Fixed income securities with low coupon and longer maturities will tend to be the most at risk in a rising rate environment. The table below is presented to demonstrate the potential impact on various fixed income investments should there be a 1% rise in interest rates.

How Best to Prepare for an Uncertain Future?

In general, we believe most long term investors can benefit from enhanced diversification, including non- US investments (developed and emerging markets) and exposure to investments that historically have exhibited low correlation to US financial markets. As previously mentioned, we believe that valuations of foreign equity markets look attractive both on an absolute and relative level. For investors with a high concentration in fixed income we believe Municipal bonds continue to offer value relative to Corporates and Treasuries.  We also believe there is an opportunity to further diversify a core fixed income portfolio with the potential inclusion of US high yield, convertible bonds, TIPs and floating rate vehicles. The actual composition or changes to any one portfolio will depend upon many variables including years to retirement, need for income, tax bracket and overall risk tolerance.

Important Disclosure: Please remember that past performance may not be indicative of future results. Different types of investments involve varying degrees of risk, and there can be no assurance that the future performance of any specific investment, investment strategy, or product (including the investments and/or investment strategies recommended or undertaken by Withum Wealth Management. [“WWM”] ), or any non-investment related content, made reference to directly or indirectly in this newsletter will be profitable, equal any corresponding indicated historical performance level(s), be suitable for your portfolio or individual situation, or prove successful. Due to various factors, including changing market conditions and/or applicable laws, the content may no longer be reflective of current opinions or positions. Moreover, you should not assume that any discussion or information contained in this newsletter serves as the receipt of, or as a substitute for, personalized investment advice from WWM. Please remember to contact WWM in writing, if there are any changes in your personal/financial situation or investment objectives for the purpose of reviewing/evaluating/revising our previous recommendations and/or services. WWM is neither a law firm nor a certified public accounting firm and no portion of the newsletter content should be construed as legal or accounting advice. A copy of the WWM current written disclosure statement discussing our advisory services and fees is available for review upon request.