All Eyes on the Fed …(Again)

The Fed’s planned reduction of government bond holdings has created some uncertainty given the unprecedented nature and scope of the endeavor.

After ten years of monetary accommodation, the Federal Reserve (Fed) has amassed an outside $4.5 trillion balance sheet of government bond holdings. Their planned reduction of such holdings has created some uncertainty given the unprecedented nature and scope of the endeavor.

The plan is to slowly let some of these securities “run off”, as interest payments will not be reinvested. The initial pace will be about $10 billion dollars a month, with a 60/40 split between Treasuries and mortgage backed securities. This monthly run off amount will increase $10 billion each quarter, arriving at $50 billion by this time next year. It is still unclear what the targeted “normal” size of the balance sheet will be, but several Fed officials have expressed the view that about $2.5 trillion would make sense under current circumstances. If this level is accurate, it would take more than five years to bring the Fed’s balance sheet down to that level. An important factor to consider is that even though the Fed is slowly moving toward balance sheet normalization, other central banks around the world are still adding liquidity to the global system, more than offsetting the reduction coming from the U.S.

Also in Fed related news, a major makeover of the Fed’s board is on the horizon. The upcoming reshaping of the board, which potentially includes a new chairperson, has important implications for bank regulations as well as the pace at which the Fed removes its monetary accommodation and raises interest rates. Given the credit the Federal Reserve has received for the economic growth and stock market recovery from 2009 lows, any changes in board composition or policy may prove to be temporarily disruptive to the markets.

Business Investment is on the Rise

For the first time since 2014, business investment is rising at a faster pace than overall economic growth and continues to point to an acceleration in spending. Businesses have begun investing money in capital equipment and new technologies as reflected in recent durable goods orders releases. (Durable goods orders is an economic indicator released monthly by the Bureau of Census that reflects new orders placed with US manufacturers for the delivery of factory hard goods.)

Since mid-2016, global economic activity has become more synchronized, with the positive momentum expected to continue. The US economy is still expanding but the greater acceleration in growth rates is occurring outside the US, with emerging economies leading the way.

While we continue to believe owning US multinational companies makes sense as the global picture improves, direct exposure to international developed and/or emerging markets may prove beneficial from both a diversification and relative return standpoint.

Over the past decade, it has been U.S. equities that have consistently outperformed international equities. Consequently, domestic valuations have moved higher on a relative basis. Out performance from US companies might be less likely as a higher percentage of economic growth is projected to happen outside of the United States. While global markets have been in “bull” mode, those countries with the lowest forward price to earnings (P/E) valuation metrics have generally recorded the highest one year gains this year. The one exception, the UK, is dealing with BREXIT ramifications. We tend to use P/E valuations for longer term relative country analysis, but clearly relatively inexpensive stock markets outside of the US have garnered investor attention. (Photo source: Bloomberg)

Another Positive for Increased International Exposure

Decreasing Correlations between US and International Markets 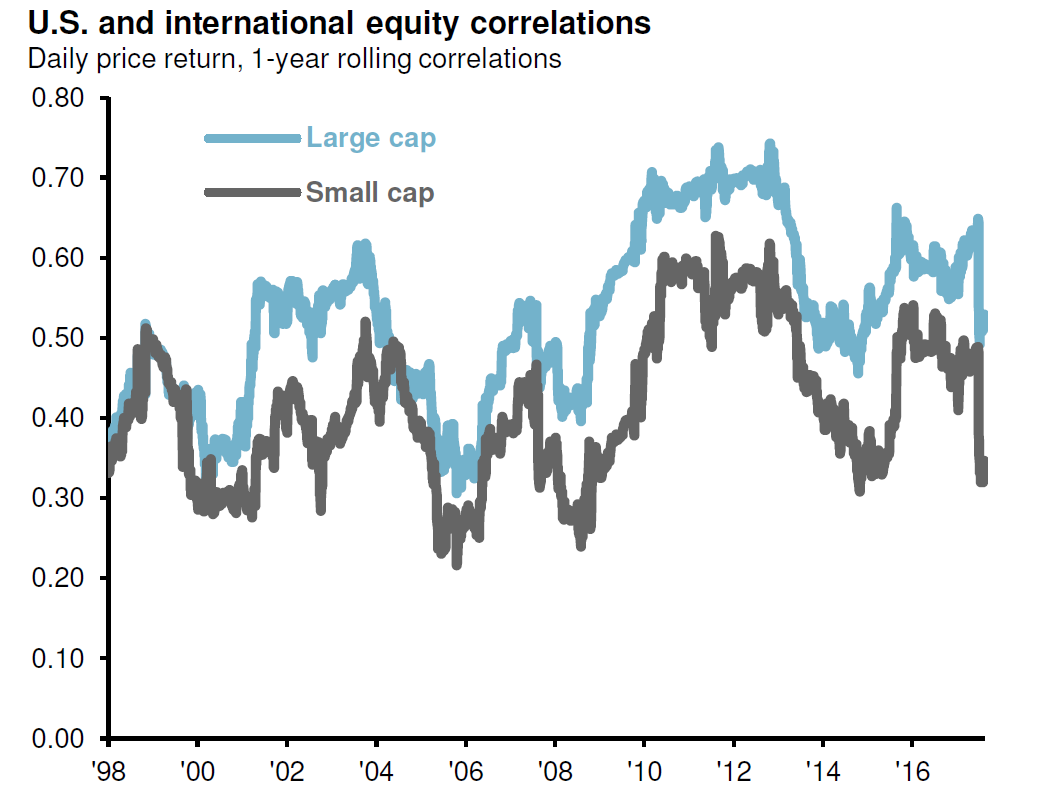 During the 2007-2009 financial crisis, many asset classes moved in lockstep (a concept defined as correlation which measures the degree in which two asset classes move together) but as the chart below depicts, the correlation between US and international stocks has been decreasing since then. This means that individual markets are increasingly moving based on local, rather than global, factors.

This is particularly notable when we compare the correlation between US and international small cap stocks, underscoring the benefits of incorporating both large and small cap international companies in portfolios. (source: JP Morgan)

The World is Not a Rosy Place

While global economies are trending in the right direction, the likelihood of market disruption related to a non-financial event, while impossible to quantify, has increased in our opinion.

Geopolitical tensions continue to run high, especially with North Korea, which has the potential to be unsettling to the markets. The increasingly strident rhetoric from both sides and an absence of consensus among major powers on how to respond to North Korea’s actions increases uncertainty. It is important to remember that long-term stock performance is aligned with underlying economic trends, not geopolitical fears. Markets can also move in the opposite direction than headline news might indicate (let’s not forget the 2016 US election).

In the United States, third quarter economic activity will likely be temporarily skewed to the downside resulting from hurricane damage but recovery efforts should eventually spur growth. Heading into hurricane season, the economy had been growing at a decent clip, with second quarter real GDP revised up to 3.1%. The US consumer remains in healthy shape stemming from a strong labor market and increasing confidence levels. Prospects for an overhaul of the US tax system also offers promise for US stocks, especially small and mid cap companies, but we believe the road to tax reform is going to be long. To paraphrase a line from the Washington publication, Politico, six republicans will craft the tax blueprint behind closed doors, but it will take the opinions of over 500 lawmakers and thousands of lobbyists before the details are finalized. Realistically, we think the talks will continue into 2018 with a big Republican push to finalize the bill before mid-term elections next fall.

Stocks around the world have been remarkably resilient, illustrated by their muted reaction to the recent earthquakes, hurricanes, the Catalunyan separatist movement and North Korea. Although underlying global fundamentals remain strong, it would be prudent to pay attention to the somewhat stealth-like rise in interest rates. Despite recent increases, it is our opinion yields still remain to low to disrupt this market. However, we continue to believe, any sustained/surprise move in interest rates, or for that matter inflation, will be to the upside. We also believe should there be a sharp or continued rise in rates, it is possible the complacency in the market may be shaken.

Important Disclosure: Please remember that past performance may not be indicative of future results. Different types of investments involve varying degrees of risk, and there can be no assurance that the future performance of any specific investment, investment strategy, or product (including the investments and/or investment strategies recommended or undertaken by Withum Wealth Management. [“WWM”] ), or any non-investment related content, made reference to directly or indirectly in this newsletter will be profitable, equal any corresponding indicated historical performance level(s), be suitable for your portfolio or individual situation, or prove successful. Due to various factors, including changing market conditions and/or applicable laws, the content may no longer be reflective of current opinions or positions. Moreover, you should not assume that any discussion or information contained in this newsletter serves as the receipt of, or as a substitute for, personalized investment advice from WWM. Please remember to contact WWM in writing, if there are any changes in your personal/financial situation or investment objectives for the purpose of reviewing/evaluating/revising our previous recommendations and/or services. WWM is neither a law firm nor a certified public accounting firm and no portion of the newsletter content should be construed as legal or accounting advice. A copy of the WWM current written disclosure statement discussing our advisory services and fees is available for review upon request.