With the U.S economy showing signs of strengthening and the S&P 500 index hitting all time highs, the Federal Reserve indicated in late May that it may soon slow down, or “taper”, the quantitative easing measures that have supported the U.S economy for the past 5 years. The Federal Reserve’s optimistic outlook for the U.S economy was perceived negatively by the financial markets. In a matter of days, stocks experienced a 6% sell off (see chart below). The 10-year Treasury yield, a general gauge of interest rates, spiked from 1.4% in May to 2.6% at the end of the quarter, resulting in a steep decline in the bond market. 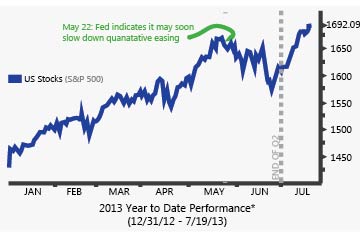 Following the sell-off in stocks and bonds, the Federal Reserve reiterated that its actions will remain data dependent when determining an exit timetable and that it will remain accommodative for as long as necessary. After the market digested this information, stocks and, to some degree, bonds quickly rebounded.

Despite the increased volatility in June, the S&P 500 index still ended the quarter up 2.9%. This also marked the strongest first half of the year for U.S markets since 1998, with the S&P 500 index gaining 13.8%. International markets have not fared as well. The FTSE All World ex U.S index declined by 2.9% during the quarter and posted a flat return for the first half of the year.

Recent economic data highlights an improving economy. The housing market recovery accelerated in the second quarter as the S&P/Case-Shiller Index of Home Prices grew by 9.3% year-over-year. This marked the largest gain since the housing crisis 7 years ago.

The April jobs report was solid and better than expected. 199,000 jobs were created for the month and the March numbers were revised up to 138,000 jobs. The unemployment rate decreased slightly to 7.5% for the quarter from the 7.7% rate announced in March, while the labor participation rate remained unchanged. We view this decline in the unemployment as encouraging. The improvement was due to more people finding jobs rather than people leaving the labor force.

Developed markets were in focus during the quarter. In April, Japanese Prime Minister Shinzo Abe announced his three-pronged approach to reinvigorate Japan’s economy, or Abenomics. Japan’s stock market soared after the Bank of Japan announced a massive bond-buying program and aggressive fiscal stimulus. While the initial efforts were well received by the markets, the structural reforms announced later during the quarter seem to have fallen short of investor expectations.

Europe remains mired in a mix of recession and slow growth, coupled with very high levels of unemployment. Recently, some of the southern countries in Europe, such as Portugal and Italy, presented signs of renewed stress in their funding costs which translates to a heightened risk of government default. On a positive note, business activity in Europe is falling less sharply than in previous months according to a study by Markit, a London based financial information services company.

Printable Version of the Second Quarter in Review (2013)

On the emerging market front, the data points to a potential weakening of growth in some economies and increasing global unrest. The Middle East has experienced rising tensions throughout the region. President Morsi was ousted as Egypt’s president by a military coup and Syria continues its bloody civil war. Tensions are also high in Brazil. Thousands took to the streets to protest a seemingly small bus fare hike.

A banking shock ensued in China when the Central Bank initially refused to help during a liquidity squeeze in the system. However, the Central Bank was eventually forced to intervene as the inter-bank lending rates continued to rise.

Overall, we believe the relative weak performance and modest valuations of international markets is creating an attractive investment opportunity (see chart below). 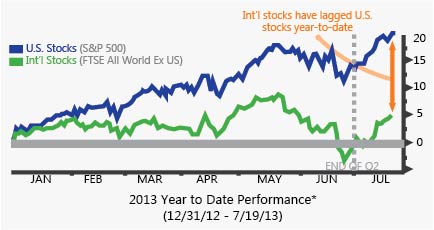 A Look Ahead: All Eyes on the Fed and its Exit Timetable

We view the Fed’s discussions on tapering, or the winding down of quantitative easing, as a long term positive. It indicates a stronger U.S. economy and will result in a more normalized interest rate environment over time. However, it is important to note that a disorderly increase in rates could create headwinds for stocks and bonds and remains a primary risk for markets. An overreaction to tapering could result in another quick spike in interest rates which may have a negative impact on the economy. Rising interest rates could cause a reduction in corporate profits, a slowdown in mortgage activity, and a selloff in global equity and fixed income markets. One important factor to distinguish is that tapering does not mean tightening, which we view as being a 2014, or later, event. For the remainder of the year, we anticipate the 10-year treasury yield to stabilize somewhere near 2.5%, plus or minus 0.5%.

Looking forward in the U.S, we continue to expect slow growth and subdued inflation with a modest reacceleration of growth towards the end of the year. We remain biased toward large companies with a multi-national focus and are becoming more positive towards smaller companies that stand to benefit from a growing U.S. economy. In addition, we believe the risk/reward balance in international equities is improving and have begun to position portfolios accordingly.

Due to various factors, including changing market conditions and/or applicable laws, the presented material(s) may no longer be reflective of current opinions or positions. The thoughts and opinions expressed in the presented material(s) relate only to the author and are not necessarily reflective of PWM’s views. Moreover, you should not assume that any discussion or information contained in the presented material(s) serves as the receipt of, or as a substitute for, personalized investment advice from PWM. To the extent that a reader has any questions regarding the applicability of any specific issue discussed above to his/her individual situation, he/she is encouraged to consult with the professional advisor of his/her choosing. Photo Credit: pixelshoot